Nathan let us know that the excitement last night's fireworks show had caused a lot of concern on the part of the administration and that Mrs Clotaire would be coming to talk to all of us.  Nathan’s words were critical but not overly so.  I interjected that I believe Steve has been an extremely positive influence here and has come here more often and spent more time here than virtually every other anesthesiologist.  He has a big heart for the Haitians and regularly visits the orphanages and supports
them.  It was certainly an unforseen consequence but there was never an intent to frighten anyone let alone terrify any patients.  I had already made a dunce cap for Steve to wear during worship.

A couple of days ago, Nathan asked me for a list of the 30 most common procedures we do here.  This morning there was talk as if the hospital was going to start implementing charges for those procedures.    Before that can be done social work capabilities have to be developed to try to discriminate indigents from those with resources.   It will also be important to notify EVERY orthopedist and anesthesia provider that the hospital is planning to do this before starting so that the volunteers know and can decide if they are going to continue to work here or not.  The issue is an important one.  There are many Haitians who are taking advantage of HAH not charging for orthopedics.  This is upsetting the normal situation for the local orthopedic surgeons who would normally be seeing these patients and charging them.  The hospital does have costs and the patients who have resources should help cover those costs.  I do want the hospital to return to being profitable and not have to rely on the current subsidies.  I am even willing to help with that by providing orthopedic services for patients that can pay as long as it is a low profile program.  I don’t want the local orthopedists to perceive me as a threat and disinvite me to their country.

We had a very large clinic today which was gratifying.  There were quite a few new patients also who seemed to fit the indigent profile.  Maybe the 150 goude charge won’t be a significant barrier after all.  I saw another 3 year old with major knock knees probably from rickets and a 5 y/o girl who was injured in the earthquake.  She has a malunited femur fracture that will need to be corrected.  Ron Anderson spent the middle of the day in the OR taking care of a couple of infections.  Then he came back and helped me finish clinic. He is a very hard working orthopedist.  I really am enjoying working with him.  I got called a bit ago for a transfer of a patient with an open tibia fracture.  It might be an interesting night.

Jeannie and Summer made great burritos and bean soup for all of the volunteers.  She also made brownies and baked them in the Prosthetics oven.  What a tasty meal.  She is such an excellent cook.  I am unbelievably lucky to have such a talented, hardworking, attractive woman in my life.

The patient with the tibia fracture is an American from Pennsylvania helping to build houses for the Haitians.  He was riding a 4 wheeler and turned onto a road and was hit by a car.  He had a Gustillo IIIB open fracture (a bit short of having your leg
completely detached.)  Ron and I took him directly to the OR and debrided the wound and washed it thoroughly.  We reduced the tibia and fixed it with a SIGN nail.  There was marked swelling with muscle bulging out of the wound.  The muscle looked viable but with these high energy injuries, it is not always possible to tell what might eventually become nonviable.  We put a wound vac on and a bulky compression dressing.  IIIB injuries by definition have extensive soft tissue loss with exposed bone that needs special attention.  Frequently, plastic surgeons are asked to evaluate and treat these cases.  It is important to get viable soft tissue to cover the exposed bone to reduce the chance of the bone becoming infected.  We do not currently have any plastic surgeons available for that kind of work.  The team that will be coming on Saturday has an upper extremity surgeon who is trained in that type of surgery and perhaps could do it.  Both Ron and I have encouraged The patient and his organization to Medevac him to the US.  We finished his surgery at midnight.  The beat goes on.

Both Ron and I put a lot of energy into that case last night and it tells today.  Steve put in a lot of work also and he could use a bit of extra rest.   I canceled a couple of cases that were elective but went ahead with some others including a redo ankle fusion and a one year old with clubfeet for posterior releases. Steve leaves tomorrow which means we won’t have anesthesia until the Lovejoy team gets here on Saturday.  Steve is a great anesthesiologist to work with.  I have enjoyed the conversations we have had as well as the visits to the orphanages and the “terrorist” plotting with the fireworks show.  I look forward to working more with him here and in the DR.  I also look forward to windsurfing with him in both Cabarete and the California coast.

Today  is our last day here in Haiti for a couple of weeks.  This will be our second trip back to Wisconsin for me to work.  I got notified today that there was another huge snowstorm in Appleton in the last couple of days.  Thirteen more inches of the white stuff.  Maybe some of it will melt a bit before we get back on Sunday. We got up very early to first transfer the patient with the bad tibia fracture to the US (6:15 departure from the hospital) and second to do a case.  Our anesthesiologist, terrorist Steve, had to leave at 8am.  We needed to a dressing change and vac removal and wound closure on a patient before he left.  We won’t have any anesthesia until the Lovejoy team gets in tomorrow afternoon.  The case went fine and Steve made it off just fine.   Ron and I made rounds with Lynn, ZJ and the CBM PT techs and then headed off to clinic.  I saw several of the TSF patients back and they are all doing fine.  I scheduled more cases for Dr Lovejoy and Dr Stutz, the upper extremity surgeon.  We wrapped up clinic by midafternoon which gave us some time 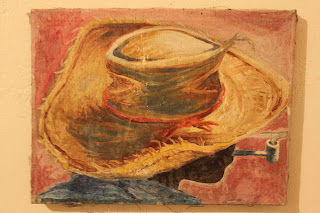 to do some exploring.  We hopped in the pickup and Ron and Jeannie and I took JJ and Roosevelt downtown where many artists have their paintings displayed.  I found one small painting of a guy with a big hat and smoking a pipe.  It was really well done.  I paid $8 for it.  We saw a lot of very well done paintings but held off on buying any more.  The traffic was pretty bad on the return but we were able to avoid any fender benders and made it back ok.  We were able to get some good pictures of a voodoo themed taptap. Little by little I am getting used to the city and how to get around.

This morning we were notified that our afternoon flight to Wisconsin through Miami had been canceled.  Apparently a major fire had broken out in the aviation fuel storage area at Miami International.  The Lovejoy’s flight from Miami to Port au Prince was also canceled.  Jeannie and I quickly got ready and hustled down to the airport to see if we could get on some other flight.  There was one standby available and we decided that I would take it since I need to be at work on Monday.  Jeannie had to spend the night in Port au Prince.  She has her own stories of waiting at the airport, then going to a hotel in Port au Prince, and getting to observe a Haitian wedding and all its regalia.

Yesterday, the patient with the open tibia fracture was transferred to Florida.  His organization decided that $35000 for a Medevac flight was too much so they arranged with a small commercial transport to fly him to Sarasota via the Bahamas, a seven hour flight.  They asked if our daughter, Summer, would  be able to go with them and take care of the wound vac and give him his antibiotics.  She and Tim had plans to leave yesterday anyway.  I did my best to talk them out of it.  At least it isn’t by boat.
Posted by Karen at 5:40 AM