July 1
We all worked together in the clinic and then did cases again until we finished this afternoon.  It has been a joy to have Anthony here even for just 3 days.  He has really enjoyed the experience.  His team came into town late today and we got to meet his wife and two children and the others working on the building project.  Anthony plans to get some of his friends together to make a team and come back this fall before we leave in November.  The generators continues to run poorly and cause brownouts.  We have to keep our little refrigerator unplugged unless we have Haiti power.  I am afraid the fluctuating voltage will burn out the motor. 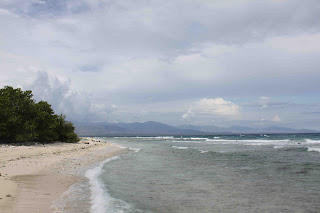 Jeannie and I  took Tim and Summer today away from the hospital.  They all wanted to go to a beach.  I thought it might be interesting to try to arrange to go out on one of the old fashioned looking sailboats that Jeannie and I had seen when we were at Wahoo Bay back in early February.  I arranged to use a hospital vehicle and Roosevelt agreed to come along and help. Neither he nor Emmanuel know how to swim but he isn’t afraid to go out on a boat like Emmanuel.   We drove up the highway to the north and west of Port au Prince.  We stopped at a couple of places and tried to find out where we could talk to someone who knew about the sailboats that we had seen.  We weren’t having much success when a young fellow randomly heard us asking and came up and told us he could take us there. 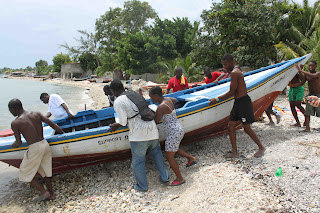 He led us to a small town called Luly.  We turned down toward the water and eventually stopped behind some houses that were on the beachfront.  He led us through a fence and past a  bunch of drying sea cucumbers to the beach.  It was rocky and pebbly and strewn with many broken seashells.  It had about a half dozen boats on it.  Several more boats we coming toward us.  Roosevelt talked to the guy who seemed to be in charge about taking us out on one of the boats and putting up the sails for us.  He agreed to do it for a price.  There are three small islands offshore called the Acardins.  There is a lighthouse on one of them.  Two young guys and an older gentleman loaded on the oars and mast with homemade sails wrapped around it.  Then they attached a small outboard motor to the transom and we all got on board. 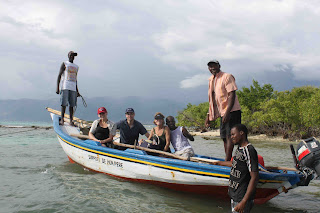 It took about 45 minutes to get to the islands.  We had a good conversation with the Haitian crew utilizing Roosevelt’s translation skills.  The more mature of the three told us that he had used the boat to successfully transport a group of more than 30 refuges to Florida.  He did it as a favor for the group.  On the way to the island today, the swells were pretty big at times and Tim got a bit sick.  The island we stopped on has a nice beach that has a lot of flotsam.  We started finding shells right away, especially hawk wing conchs.  There were also lots of small pieces of polished coral.  We spent at least an hour beach combing and having a great time.  Roosevelt loved rolling in the shallow water and the beach.  We enjoyed the sandwiches and snacks that we brought and then got back in the boat for the return trip.  The crew stepped the mast and put up and adjusted the sails.  The mast is in two pieces.  The first section is fastened to the mid-line near the front of the boat.  The second is a long piece of heavy duty bamboo that is attached to the top of the sail and is hoisted as high as possible until the sail is tight.  Then a line ties it near the bottom of the main section of mast.  The boom is 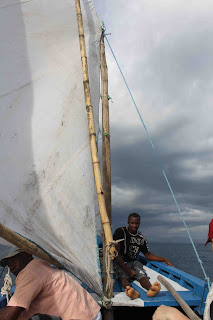 secured also near the base of the mast and a front triangular part of the sail is secured at the very front of the boat. It was fascinating to watch the process.  It seemed like we had gone 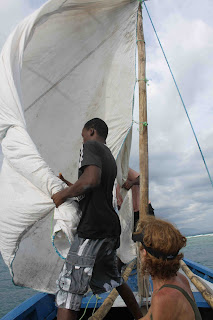 back centuries as we rode in the homemade wooden boat with the rigging made of locally grown materials and sails clearly hand sewn.  It was a priceless experience for all four of us.