Aug 7
I had no travel glitches and arrived around noon.  Scott was just finishing a case.  Jerry King’s team was delayed out of Miami today and won’t be getting in until tomorrow.  It’s great to see Scott again.  He has done a large number of cases in the week he has been here.  More than 80 patients came to the clinic last Monday.  Both Dr Adrian(anesthesiologist) and Lucia are here from the Dominican Republic.  Scott always arranges for them to be here when he comes down.   They were part of his team that went to Cap Haitien  four times a year for several years.  They also came with him 2 days after the earthquake and stayed for an extended period of time.  They have been operating until after midnight nearly every night during the week.  Jerry King and the anesthesiologist, Dave Brannon, were supposed to arrive this afternoon.  There was a problem in Miami and their flight was canceled so they will be arriving tomorrow.  They have several other team members including OR nurse, scrub tech and recovery nurse.  Jerry and Dave came here in January and were a big help.

Aug 8
Scott and I went for a 30 minute jog/run early this morning.  We had a big clinic today but unfortunately, the generator gave out on us and we had no power to take xrays.  We had to send many of the patients away and tell them to return either Wednesday or Friday.  Welcome back to Haiti, Dietrich.  It took about 5 hours to get the power back on.  What a relief that was to get air conditioning again in the OR.  We had a lot of cases and were just about to curtail the schedule for fear of running out of power from the inverter.  We were able to continue doing cases.  The King/Brannon team made it in well rested after their unexpected night of rest in Miami and started to work right away. The Appleton team finally made it in by late afternoon.   Their travel started in the wee hours of the morning with a three hour drive to Chicago and then flights to Ft Lauderdale then on to Port au Prince,  They were all pretty exhausted after traveling since very early in the morning.

An older man came in to clinic with a terribly foul smelling leg.  He was initially injured in the earthquake and apparently has had an open wound ever since.  It got a lot worse in the past several weeks.  His hgb is less than 8 so we need to get blood ready and then do an amputation.  Welcome back to Haiti, Dietrich.

I finished my last case at 11:30 pm and then went in to watch Scott do his last case – a complex TSF that involved the foot.  It went well and I learned some more.  I still don’t feel comfortable doing those cases though.  I am happy to follow them and deal with any issues that come up in their post op care.  Scott finished it about 2 am. 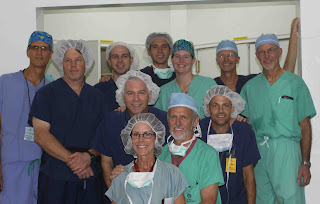 Aug 9
The Appleton team was up and raring to go.  I had an early morning administrative meeting while Scott got two ORs running.  Jeannie arrived fairly early this morning.  It is so good to have her back with me again.  I really miss her when she goes without me.  Scott did some more TSFs today including another fibular hemimelia.  It was even more complicated than the one he did late last night.  By the time he finished at 6:30 this evening he was ready to throw in the towel even though there was one more patient that needed a TSF.  Adam had also pretty much reached his limit and was zoned out.  We had the 75 y/o man with the terribly smelly infected leg that needed an amputation.  We were able to get one unit of blood for him which was really important since he had a hgb of less than 8.  He certainly was higher priority than the remaining elective case.  The patient for the TSF was very understanding and agreed to come back tomorrow.  He is a straightforward TSF that I can do.  Errol helped me do a guillotine BK amputation that we finished before 10 pm.

The team from Wisconsin consists of Errol Springer and his partner Jay Minorik.  They brought Eric Bowen, orthopedic RN who has been to Haiti before.  Steve Dungar is their anesthesiologist.  Steve’s son, Ben, came here with the Wisconsin team last August.  Ben is a pre-med student.  Dr Springer brought his son, Evan, who is also a premed student.
Posted by Karen at 6:43 AM