A Tour on the USNS Comfort

Aug 22
The big Monday clinic went fairly well in spite of our xray machine
not booting up.  We brought the C-arm out to the front of the OR and
kept it plugged in to the invertor and used it for most of the films
we needed.  It worked reasonably well.  I saw another 4 y/o old boy
with severe knock knees.  He should do well with 8 plates for
correction.  We have a lot of cases besides the tumors for Dr
Zuckerman so we arranged for Dr Adrian to come over from the DR to
give anesthesia.  Francel was able to arrange Haitian
anesthesiologists for only Tuesday and Wednesday.

Jeannie and I had another distraction today – Hurricane Irene!  The
initial trajectory had it hitting the DR on the southeast and then
becoming a tropical storm as its strength was diminished by the hills
and high mountains.  The storm changed course a little bit as it
crossed over the Virgin Islands and headed just a bit farther north.
It just touched the north coast of Puerto Rico and headed for the DR.
It stayed slightly offshore as it continued WNW.  It became a Category
2 hurricane as it honed in on Cabarete.  100+mph winds can do a lot of
damage and carry heavy objects through windows.  Then the horizontal
rain floods the interior.  Of course, the storm surge with that sized
hurricane can be 10-15 feet.  Hurricane Katrina’s was 27 feet.  Our
place on the beach is only about 8-10 feet above sea level.  The math
is easy.  LOTS OF DAMAGE!!  Fortunately, the surge was only about 4-5
feet and the wind didn’t carry any heavy objects through our windows.
I tracked the storm for 2 or 3 hours during the night.  Cameron was
somehow able to sleep through the worst of it.  Another bullet dodged
by the grace of God.

Aug 23
We had 10 cases scheduled and did almost all of them.  Doctor
Zuckerman worked with Adam most of the day on the tumor cases.
Everything went well.  I helped Francel with a hip hemiarthroplasty.
Dr Adrian came over on the bus from Santo Domingo.  It is a good thing
we arranged that since the Haitian anesthesiologist told us today that
she wouldn’t be able to come tomorrow.  We have another 8 or 9 cases
on the board for tomorrow as well as Wednesday clinic.

Aug 24
We had more than 50 patients in the general ortho clinic.  Then there
was the club foot clinic as well.  Francel and I did most of the
clinic while Lee and Adam stayed in the OR most of the day.  I saw a
12 y/o boy with severe knock knees.  Each side measures 40 degrees.
He will need femoral and tibial osteotomies.  A 17 y/o girl came to 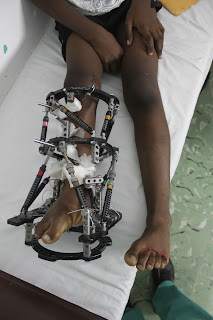 the clinic with marked bowleg on one side only from Blount’s disease.  I’ll be able to put on a TSF and osteotomize the tibia and fibula. She won’t be ready to have her TSF taken off before I leave in November but it should work out for when I come back for a week in January.   I evaluated a man with a large knee effusion.  He has moderate degenerative arthritis.  I aspirated 60 cc’s of joint fluid then injected the joint with steroid.  I showed him the fluid I took out and told him it was a very good lubricant.  I jokingly offered to go into business with him selling lubricant.  He got a great big smile.

The orthopedic pathology continues to stream in.  The surgical
schedule was interrupted by a general surgery emergency.  It just
helped us to be able to focus on the big clinic better.  The clinic
xray machine still isn’t working.  We are hoping that Fuji can fix it
remotely but haven’t been able to reach critical mass yet with the
people that need to give input.  We again used the C-arm for a few
clinic xrays.  Of course, we keep it plugged in with an extension cord
to the invertor to avoid voltage fluctuations which could take out a
circuit board.  Several of the patients had enough money to pay to
have their xrays taken in the xray department on permanent films.  I
did another arthroscopy with Francel.  He still has a ways to go
before he can start doing them on his own but he is making progress.
We also did an above knee amputation.  The clinic finished a few
minutes before 5 pm and we finished the cases before 8:30 pm.

Aug 25
Our surgical schedule looked good until we were informed as we were
starting our first tumor case that there were two emergency C –
sections.  The first one may have been somewhat urgent but the second
looked suspiciously as if it was being done to follow the first for
the convenience of the doctor.  C’est la vie!  I wasn’t able to start
my first case with Francel until after 1 pm. 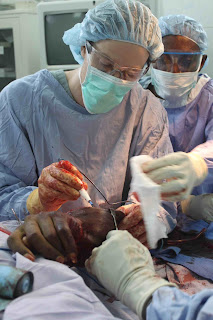 Meanwhile Lee did the case of the week if not the year with Adam.  The patient has a grapefruit sized mass in his wrist.  He had some type of unknown tumor removed and the wrist fused with a plate and screws about five years ago.  The mass has been steadily increasing in size for the last year or more.  Hours of meticulous dissection were necessary to identify the tendons and neurovascular structures and separate them from the tumor.  Lee is unbelievably patient.  It is hard to believe that he is a surgeon.  Most surgeons don’t have even a fraction of the patience that he has.  Adam kind of zoned out a bit periodically during the case.  I was able to close the BK amputation stump over a couple of drains.  We then lost water to the hospital – something about the pumps not surviving the brownout in the middle of the night last night.  We had to cancel two SIGN nails.  We hope to do at least one tomorrow.  I also have a patient tomorrow with a large herniated lumbar disk.  Hopefully the water will be back on. 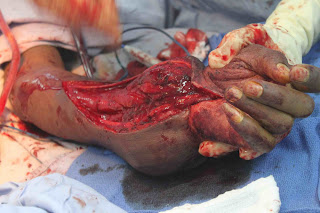 Aug 26
Randy actually got the water on late last night.  He activated the old system.  It doesn’t have great pressure but it is way better than nothing.  Lee did a tumor case and then I did the spine case.  The
patient fell 8 months ago and has had back and leg symptoms since. His foot is numb and then 3 weeks ago he lost control of urination. He actually came in with a  CT scan that Francel had ordered which showed a large disk herniation at L4-L5.  I found an extruded disk the size of a large grape.  I got several more good sized fragments out of
the disk space.  He was moving his toes and feet nicely after he woke
up.  It will be interesting to see if he gets bladder function back.
I did one of the SIGN nails with Adam, the resident.  It was an
antibiotic cement coated job that went well.  The patient had had
several prior operations and drained for a period of time after at
least one of them.   Both Dr Zuckerman and Adam leave early tomorrow.
Lucia and Dr Adrian also leave in the morning.

Arrangements have been made by Ron Anderson for us to tour the USNS
Comfort tomorrow.  Ron is part of a church group that is doing
surgical cases on the ship this week and next.  The ship was here
about a week after the earthquake last year and stayed for nearly 3
weeks.  We have seen several patients that had surgery on the ship
last year.

We got up early to see everybody off then went down the street with Emmanuel and caught a taptap.  We had to change taptaps in the middle of town and that took a while.  I was getting a little nervous because we were supposed to be at the terminal for the boat pick up at 8:30. The second taptap dropped us off on the road near Cite Soliel.  The walk to the terminal and then to where the boat came in was over a mile.  We had to go through 3 checkpoints.  We got there at a fewminutes after 8:30 and found a fairly large crowd of Haitians waiting to go out to the boat for medical care.  The boat came about 15 minutes later and loaded all of the patients and a few navy personnel and there wasn’t room for us.  The Petty Officer in charge apologized for us having to wait for the boat to come back. Meanwhile, who should come to wait also but Bernard Nau.  He is a prominent Haitian orthopedic surgeon.  He has been coming to work on the ship nearly every day.  Several patients on the boat with us are his.  I had a nice long talk with him.  Emmanuel had never been on a boat before and was a bit apprehensive.  His life jacket gave him comfort and the trip only took about 15 minutes.  The Comfort  is huge – nearly 900 ft long! We were met by Amanda Dolittle who has been in the Navy 19 years. 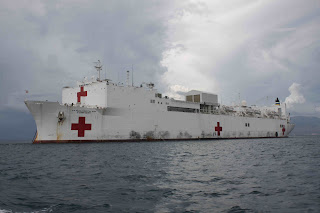 She started us on the tour and then Ron came out of surgery and joined us.  We also met Bill Todd who is the chief medical officer and a pediatric orthopedic surgeon.  I was disappointed that Dr Tim Mickel and Dr Mark Swiontkowski were still in the OR doing a case.  The tour was fascinating.  The ship has 1000 hospital beds and 80 ICU beds. There are 10 operating rooms including an  angiography suite.  They have a very nice CT scanner and the lab and pharmacy are very complete.  There is a nice rehab area as well.  We met the lady pathologist who has been working on our specimens.  The dental clinic is nicely equipped.  They even have veterinarians as part of the staff. They do all of their work on shore.  After the tour we were unexpectedly invited to join all of the orthopedists for lunch.  Both Mark and Tim had finished with their cases and were able to join us. We had a great time getting to know each other.  I had taken a book with me in the hopes I could share it with Tim Mickel or someone else who might be interested.  I showed it to all of them and told them about the opportunity we have to really establish excellent orthopedic care for the indigent.  I signed it and presented it to Dr Todd.  The others all plan to get at least one book.  I hope they spread the word. They are all interested in coming here and helping with the work.  Bill then gave us a personal and quite emotional Powerpoint presentation of his experience being the only orthopedic surgeon on the ship when it arrived one week after the earthquake.  He worked nearly nonstop for about five days.  The whole day was a really neat experience.  I got a lot of pictures.
Posted by Karen at 2:46 PM