The Dietrichs Return to Haiti


Another team embarked on a week long trip to Hopital Adventiste d'Haiti from August 6-10. Team members came from Utah, Minnesota, Wisconsin, Florida, Illinois and the Dominican Republic to Haiti Adventist Hospital on August 5, 2012.  The orthopedic medical team goals were evaluating and treating patients with orthopedic conditions and continue with advanced orthopedic training for Dr Francel Alexis. 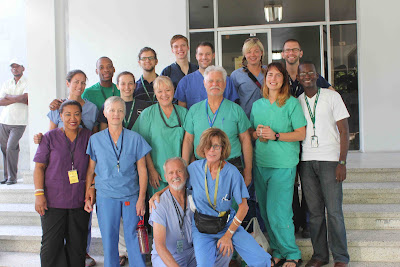 5 Aug
Team members found the assigned hospital accommodations.  The small building built by Project Hope next to the rehabilitation building has been equipped with air conditioning and 6 bunk beds.  There is a single bathroom in the building.  Other bathrooms are available in the nearby rehab building as well as in the hospital.  The “new wing” of the hospital that formerly accommodated the long term volunteers has been nicely remodeled and is nearly ready to be opened for patient care.  The mezzanine area formerly used as sleeping space for short term volunteers has been divided into four offices and is used for classes and training and office space.  Long term volunteers now are occupying the renovated duplexes.  A chain link fence with locking gate separates those two buildings from the remainder of the campus.  The only remaining long term volunteer from our year here is Marc.  She coordinates the different training programs.   Two long term volunteers from Germany are involved in the rehab program.  Jeannie and I arranged for the whole team to have pizza and salads at the Auberge.  Eric and I cooled off in the pool for a few minutes when I took them to check in.  I also ordered the food ahead of time so we wouldn’t have such a long wait.  It worked out great.  Emmanuel and JJ came with us to eat at the hotel.  It is great to see them again.

6 Aug
Dr Alexis met us after the morning worship/orientation and we began the workday.  Only 2 orthopedic patients were in the hospital.  One is an elderly patient with a pressure ulcer on her hip.  The other had a femoral neck fracture  and Dr Alexis did a hemiarthroplasty.  Francel had scheduled several smaller cases for a bit later so we all started seeing patients in the clinic.  It was a big clinic and we saw lots of good cases.  Both Eric and Randy had no problem evaluating and making decisions on patients.  We used both of our regular rooms for seeing patients as well as the xray room since the digital machine isn’t working.  Since there are four of us, I got a fan and some chairs and evaluated quite a few patients in the hallway.  We must have seen nearly 10 patients with frames of all types.  They were mainly done by superspecialists like John Herzenberg, Dror Paley and , of course, Scott Nelson in the last several months.   All of the patients with frames were doing very well.  We saw the usual mix of children with bowlegs, knockknees, clubfeet and adults with fractures both new and old.  There were several cases of infections as well, some of them post op.  The surgical cases were hardware removals and the decubitus ulcer debridement with wound vac.  Mary and Katie returned from the orphanage project very excited.  I’ll include Mary’s comments.

Jeannie and others exchanged their OR garb for chefs hats and whipped up a tasty spaghetti dinner for the whole team.

7 Aug
Francel and I did a recurrent clubfoot case to start the day. He seemed more self assured doing the case than I have seen in the past.  That is a very good sign.

Francel, Randy and I then did a 14 year old boy with bilateral Blounts.  I was impressed with Francel’s initiative in doing the case.  He was a fairly small child and we couldn’t do both sides simultaneously.  Francel did a very careful and thorough job on both sides.  The osteotomies went well.  We will have to get good orthogonal xrays and then measure the deformity as well as the mounting parameters for both frames then enter all the data on the internet.  I never cease to be amazed that this type of complex corrective surgery is being done on a regular basis here in Haiti.  The cost would be prohibitive if the frames would have to be purchased.


Eric did a shoulder arthroscopy on a young man with recurrent shoulder dislocation.  The patient told me it had dislocated “a hundred times.”  Eric wasn’t intimidated in the least by our minimalist arthroscopy equipment and did his usual impressively efficient setup.  He found a large Hill-Sachs lesion and did the corresponding repair.  He made it look easy.  He is a good teacher and spent time explaining things to Francel.  We have at least two patients with knees that need to be scoped.  Francel can benefit a lot from Eric’s expertise and knowledge. We had a bilateral recurrent clubfoot case that Francel had scheduled for posterior medial release but I didn’t think we should do it.  He hadn’t done any preop casting and I was sure that the patient would need several cast changes with manipulations post op.  There won’t be anesthesia available for that.  We manipulated and casted her.  Francel will continue to cast in the clinic.  The feet are so rigid they almost seem like arthrogryposis but the child has no other joints involved.

Eric took off some frames today as well.  Our last case was a young man with an infected femur fracture.  He had an antibiotic coated SIGN nail that was put in last year.  He had 3 locking screws and the nail that all came out fairly easily.  We excised the fistulas and removed nonviable bone as well as infected tissue from the canal.  The tobramycin methacrylate beads were placed in and around the canal.  If the infection can be cleared up, he will need a bone graft and IM rodding again.

Jeannie made her famous vegeburgers tonight so we had a real feast.
Posted by Karen at 7:33 AM