Another very large clinic even though a ‘nonclinic’ day.

The Bilateral clubfoot posteromedial release in a 5 year old patient with arthrogryposis took most of the morning  for Jerry and me.  That made the clinic last much longer into the late afternoon than usual.  I also did a knee manipulation in a patient that Scott and I had done a femoral osteotomy on.

The volume of cases continues to increase.  We had 3 cases planned including bilateral 8-plate femoral epiphysiodesis in a 3 year old, adjustment of a TSH and the spine fracture.  A patient with a healed femur fracture and very stiff knee came as well for a quadricepsplasty.  I was quite sure he wouldn’t show up since I had ordered blood typed and crossmatched.  He had come in 2 days previously and told me he had B+ blood and there was none available.  He had a unit ready.  Since the blood was still not in the hospital for our spine patient(it was coming from a hospital a couple of hours away), we decided to do the quadricepsplasty.  It was an interesting and quite challenging case.  The vastus intermedius was completely fibrotic and limited knee motion,  There was marked intraarticular fibrosis that also required extensive debridement.  After eliminating those obstacles to knee range of motion, Jerry and I were able to get 130 degrees of flexion prior to repairing the vastus medialis and lateralis to the rectus femoris.  After the complete repair and closure, we held him at 80 degrees of flexion and immobilized the leg in a splint.  I will consider it a success if the patient gets 90 degrees of flexion and at least some power to fully extend the knee.  I would love to have a CPM(continuous passive motion) machine to help him get the desired motion.  I will try to jury rig up something to keep him from becoming totally stiff.  I am sure that at least one manipulation under anesthesia will be necessary during his recovery.  By the time we finished all three of these cases, the blood had arrived for the spine case.  It was after 5 pm and we decided rather than risk a late night recovery from a major surgery for the spine patient that we would do it next morning.

The spine case went well yesterday.  We had to put his case off until Sabbath because of the delay in getting blood prepared.  I wanted everything totally in order before starting.  I didn't think that I would actually need blood during surgery(and I didn't) but I wanted it just in case.   I was fairly well rested even though it has been difficult to get good sleep for the last week or more d/t a challenging family situation.  I prayed for God to give me courage and keep my mind clear.   I have done no spine surgery in the last 10 years except for the one case I helped Scott with last month.  I have NEVER done a case of pedicle screws without a spine surgeon helping who was much more experienced than I.  The last one of those that I did was in 1992 and I only did 2 cases.  I did a lot of spine surgery in Puerto Rico more than 2 decades ago including many instrumentations, but pedicle screws are another step up in complexity and risk.  Jerry King did a very nice job of assisting on the case, but he has never done any pedicle screws himself(nor seen one put in) and has done virtually no spine cases in his practice in the last 20 years. I had planned to instrument L1 and L3 with a total of 4 pedicle screws connected by rods and then fuse the two levels.  We encountered more pathology than expected.  The interspinous ligament between T12 and L1 was disrupted and there was an obvious fracture of the lamina of L1.  I decided to include T12 in the pedicle screw instrumentation and fuse that level as well.  A quick phone call to Scott in Loma Linda confirmed that decision.  A preop CT scan would have given us the information ahead of time and proper planning could have been done.  That capability will be some time in the future for surgeons here at HAH.   At that point, I was very thankful that I had made sure that blood was available since the magnitude of the operation had just been increased by 50%.  Everything proceeded smoothly and the blood loss was not great. 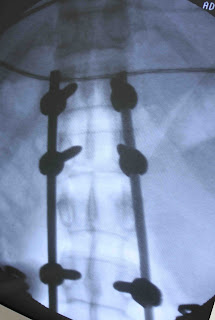 The pedicle screws went in nicely thanks to the C-arm functioning perfectly.  Jeannie put on her x-ray tech hat, lead apron and did a great job of positioning it all during the case.  After putting in the first 5 screws, I offered Jerry the initiator and he proceeded to place the 6th screw perfectly.  Placing the rods and finishing the fusion was the easiest part of the whole procedure.  Dr Brannon gave excellent anesthesia.  He was able to lower and then maintain the patients pressure to a safe level that decreased significantly the blood loss.  Lucia was a tremendous help.  She is totally familiar with the instruments and implants.  It was an answer to prayer that she was able to come on short notice and help the case go so smoothly.  She is a wonderful Christian lady.  Her elegant preop prayers are a thing of beauty.  We are incredibly fortunate to have her skills, experience and enthusiasm as a resource.  Scott is again to be commended for the part he has played in developing this relationship.


Having both Dr King and Dr Brannon here this week has been a great help.  They provided the support that was essential for the cases that presented.  If more acute trauma had come in, a larger team would have been necessary to deal with the volume.  I believe the two week hiatus at the end of December was responsible for the smaller number of cases that needed surgery.  Hopefully, the field hospitals will realize that we are once again available for orthopedic treatment and will resume sending patients.  Some may have found alternative solutions to their pressing operative orthopedic cases and perhaps will no longer refer patients here.

Dr King takes the perfect approach for evaluating and managing the wide variety of, at times, complicated cases we see in the clinics.  He is thoughtful and considers the options carefully.  He broad experience as a general orthopedist gives him the background to assess patents and develop an appropriate plan of treatment.  His efforts to stay in the big somewhat intimidating clinics while I did cases was admirable.  In addition, he would finish cases, place casts and take care of orders and paper work while I would go back and finish a clinic or have an administrative meeting or spend time on the internet studying some aspect of patient management.  I wish he were in a position to be able to come and work with me for longer periods of time.  I am optimistic that he will come back at least one more time during the remainder of my year here.

Dr Brannon is one of the best anesthesiologists I have been privileged to work with.  He thoroughly evaluates each patient prior to initiating treatment.  I have worked with faster anesthesiologists but certainly none have been better than David.  His careful preparations match the  smooth inductions.  Even the “Brutane ” induction of the little 3 year old girl for 8 plates in both distal femurs went quickly.  None of our cases had any anesthetic issues.  His patience in dealing with our lack of PACU was admirable.  Again, if our volume of work had been greater, it would have been very helpful to have a nurse with the team to manage the recovery in the OR and then Dave would have been free sooner to initiate another case in the second room.  I would love to be able to work on a regular basis with David.  I am optimistic that he will return again this year.  We talked a fair amount about different scenarios for solving the fractured Anesthesiology service here at HAH.  It is a fracture that a simple cast will not adequately treat.   A full ORIF is necessary.  Perhaps a solution as complex as a Taylor Spatial Frame is necessary.  One idea is to find 12 anesthesiologists who would each take responsibility for one month of the year at HAH.  Each of those twelve could then network with however many anesthesiologists/anesthetists they would like to cover the 4 weeks.  If volunteers provide the anesthetic care for the indigents, it removes another cost so that the subsidies necessary for the indigent care provided are minimized.  I believe that developing a formula for charging every patient, especially indigents, for their care so that we can then pay Haitian anesthesiologists to give them anesthesia would be in essence “robbing from the poor to pay the rich.”  This is not to say that the Haitian anesthesiologists are rich or shouldn’t get some compensation for their work.  I believe that if the hospital provides the necessary environment to attract paying patients, then there will automatically be plenty of work that the independent anesthesiologists can bill for.  That means that emphasis should be placed on finishing the new patient wing and remodeling the OR.  An alternative would be to contract with the anesthesiologists so that any money collected by the hospital specifically for anesthesia services could then be shared equitably with the providers.

I asked both Dr King and Dr Brannon for suggestions from their perspectives of how things could be improved so that we could be more effective in our mission.  They both specifically suggested that some improvements in the basic accommodations might be helpful in attracting needed specialists.  They found it difficult to get sufficient rest on an uncomfortable army cot night after night.  Though this might be satisfactory for the occasional masochist, the majority of people need a good night of rest whenever possible.  Simple bunk beds with a firm mattress would be a major improvement.  The current area for short term volunteers could easily be temporarily enclosed and even air conditioned to provide a bit more privacy and comfort.
Posted by Karen at 3:08 PM