The all night flight from Southern California got us in to Port au Prince at 10:30 in the morning.  I was a bit “fuzzed out” when I got to the hospital and started to work.  I met Dr Blake Stamper and his team from Arizona.  Dr Stamper came with this same team to HAH about 6 weeks after the earthquake last year.  The anesthesiologist with the team is Dr Antoine Louis-Jacques.  He was born in Port au Prince. 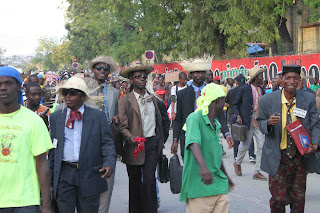 He did all of his medical training in the US and is the chairman of the surgery department in the hospital in Bullhead City, Arizona where Dr Stamper and the other members of his team work.  He encouraged Blake and the others on the team to come last year and to return again this year.  Tara, Shelley and Charley all work in the OR with Dr Stamper.  There were still patients to see in the clinic as well as surgical cases so it was back to work.  All of the Stamper team are hard chargers and work very well together.

Several patients didn’t show up for surgery since it is Mardi Gras.  We still had a good sized clinic and did several cases.  Emmanuel made a special request today.  He has a family member who lives quite a distance away who has a nonunion of a fractured femur.  I scheduled him for surgery several weeks ago and ordered 2 units of blood.  He hasn’t been able to find the four donors that the Red Cross requires to provide the 2 units.  He asked me to help.  After talking it over with 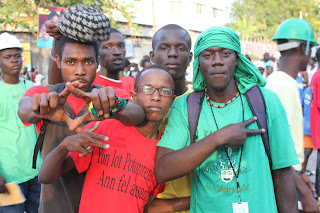 Lynne, I decided to donate a unit myself.  I really enjoy working with Emmanuel and respect him.  Since we had a bit of extra time in the afternoon, we all went in the ambulance to the General Hospital where the Red Cross blood bank is located.  After donating the blood, I had some time while they were cross-matching for our patient.  I went out on the street with one of the translators and bought some fresh peeled oranges.  They were super sweet.  The parades had started for Mardi Gras.  I had a great time getting pictures.  There were tons of interesting characters.  There were historical figures, people in funky costumes, girls dressed like cheerleaders and many different kinds of musical groups.  Guys dressed up in costumes cracked whips.  Even little kids got in on the action.  I can make a whole album of the photos.

We had another big clinic today, even though it is Ash Wednesday and a holiday.  Being Wednesday, meant lots of babies and little kids and their moms for the clubfoot clinic.  Dr Kaye Wilkins came for the clubfoot clinic.  He is a professor of orthopedic surgery  and pediatrics at he University of Health Sciences in San Antonio, Texas.  He has many academic publications to his credit.  He has made many trips to Haiti in the past two decades.  He has been instrumental in establishing quality clubfoot treatment in the country.

We worked in several surgical cases as well.  Ben Chen, 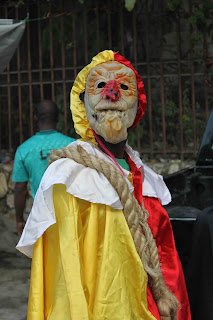 third year ortho resident from Loma Linda, arrived today.  He gets high recommendations from Dr Nelson.  This afternoon, both Dr Adrian and Lucia arrived from Santo Domingo.  Scott had already arranged for them to come for his special clinic and surgeries with Dr Dror Paley starting March 12.  They came early to help with cases, especially the spine fracture.  They brought a lot of materials with them including the irrigation bags for arthroscopy and my set of instruments for doing anterior cruciate ligament reconstruction.  They wasted no time in going to work.  Dr Wilkens had 3 clubfoot cases that needed tendoachilles lengthening.  They did them after the clinic and the other surgeries were done.  It was a treat for me to be able to get acquainted with someone of Dr Wilkens’ stature in the orthopedic academic community.  We talked for quite a long time after he finished the cases.  He gave a very generous donation to the Haiti Indigent Patient Fund.

Today was a very productive day.  The clinic was very large especially for a Thursday.  Fortunately, the PA who is here on his own from Connecticut took care of many of the cases.  He is a really big help for us.  Blake, Ben and I wouldn’t have been able to finish our surgeries until much later if we had 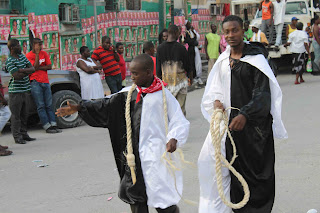 been tied up much of the day in the clinic.  We did a total of 8 cases and finished before 6:30.  Having Dr Adrian here is terrific.  We ran two rooms all day.  I worked with Ben and did the peds cases while Blake did the adult cases.  Blake’s team is outstanding!  Dr Louis-Jacques  is a very careful well trained, experienced anesthesiologist.  His caring way and ability to speak to the patients is very comforting to them.  Charley, Tara and Shelley are all hardworking and very good at their work.  Having them here is a terrific relief for Jeannie.  Now we also have Lucia back from the DR.  She came a couple of days early to work with me on the spine stabilization that we have planned for tomorrow.   The two teams worked together on the last case since it was bilateral.  The nine y/o boy was born with a very rare case of tibial hemimelia with associated femoral bifurcation.  He has scooted around in the sitting position all of his life.  We did through the knee amputations since the deformities were so severe that no reconstruction was possible.  Having the prosthetics 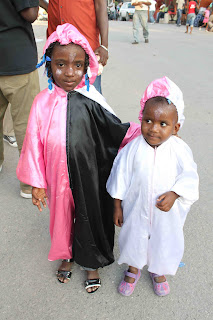 program here is extremely important.  Now he can be fitted for his artificial legs and be able to walk upright.  He and his mother have been looking forward to this for months since they decided to have the surgery.

We were able to keep two operating rooms going again today.  Blake and team did several cases while Ben and I did the L1 spine fracture and then followed with the femoral nonunion.  They each took several hours.  I was able to see several clinic cases in between the surgeries.  Three patients with a total of 4 spatial frames came in for followup.  They are all doing well, including the 9 year old girl with the bilateral Blounts disease that Dr Michael Vitale and I operated on in January.  We sadly said goodby to the Stamper/Louis-Jacque team.  I am hopeful that we will be able to work with them again sometime before our year here is up in November.  Tomorrow both Dr Paley and Nelson will arrive.  We are planning a productive 4 days of limb deformity corrections. 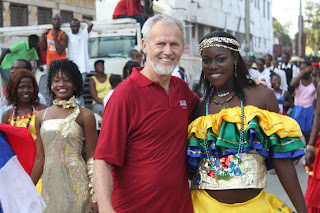