Rebuilding Bones and Strengthening Relationships in Haiti with Dror Paley

Dr Paley and team arrived well before noon and we started seeing patients and then doing surgical cases.  Dr Paley put a miter TSF on a patient with a severe clubfoot deformity.  It is complex and will require a lot of attention to make sure the program is followed and works.  There tend to be collisions of wires and pins with connecting rods.  Those have to be identified and dealt with so that the program is successful.  Scott and I worked on the C-arm until nearly midnight but were unsuccessful at getting it working.  The service disk doesn’t seem to be working properly.  Scott has two more copies but they are in California.  We’ll try to have them sent to Summer who will be coming on Thursday.  Not having the C-arm means that some of the cases will have to wait.

We had lots of challenging but interesting cases including severe bilateral Blounts disease.   A German ophthalmologist who works for CBM came in this morning to see me.  He injured his Achilles tendon last night while dancing.  It was a complete rupture.  I repaired it surgically today.  We finished the last case after midnight.  Dr Paley and Scott each did a side on a patient with severe Blounts even though we didn’t have C-arm available. They are both really talented surgeons.  Scott asks Dr Paley questions frequently.  Dr Stephen Mulder arrived today.  He is an anesthesiologist who practices in California.  He has been here before and has an interest in the orphanages.  He is 6 feet 9 inches tall.  He is a graduate of LLU.  We were on the campus of LLU during the 1977-1978 school year.   He is an avid windsurfer!  He lives and practices in the same town where Dr Nelson’s parents live.  He is very smooth and not intimidated by virtually anything.  He loves to read and has a great sense of humor.   I think we are going to have a good time with him.  He will be here for two weeks.

We had another monster clinic today.  I got there later than I wanted to  because Dr Honore, the chairman of the board asked to see me for “one” minute.  It turned into nearly 45 minutes.  Most of the children that I have been saving up with complex deformities came in.  That is good because we certainly want to take advantage of Dr Paley and Scott’s surgical skills to correct these severe deformities.   In addition, Dr Spendey was in the ortho clinic when I got there to begin with a patient with low back and leg pain.  He was the Adventist pastor of her church.  It took about 30 minutes to assess him and lay out a treatment program for him.  I had hoped to already have several of the peds patients already seen and teed up for Dr Paley to examine.  Then a young patient came in with a displaced fracture of the distal radius that had just happened while playing soccer at school.  There went another 30 minutes while I examined him, gave him a hematoma block then did a reduction.  I had hardly seen any of the peds with real deformities when Dr Paley walked in.  I’m sure he must think I am one of the most disorganized orthopedists he has ever had to work with.  There were dozens of babies and children with almost every imaginable orthopedic deformity.  It was a “madhouse/zoo” experience.  We did get to see a couple of interesting patients before he had to go into the OR.  While he was doing his case, I tried to evaluate as many of the patients as possible and treat and discharge those that didn’t need to see him.  As I was in the midst of this I got word that the first patient that had a TSF placed for clubfoot was in serious distress.  The case had been totally uneventful.  She awakened from the anesthetic completely without problems and was taken back to her bed after appropriate monitoring. About two hours or so later, the nurse apparently found the patient unresponsive.  A full resuscitation effort was unsuccessful.  She was a happy 10 y/o with a very spontaneous smile.  I am not sure that having a PACU would have prevented her death, but it would have given us a chance.  We are all sobered by this tragic occurrence.  I am going to lobby hard with administration to have another highly trained nurse volunteer here full time until a training program is established and producing nurses of ICU quality.  Our orthopedic service is very busy and some of the cases are long and complex.  Having appropriate postoperative monitoring is essential to minimize these kinds of events.

Dr Paley also put an Ilizaroff bone transport frame on  Sunday.  He was here for such a long time with his ex fix and a wound vac to get his infected tibia to heal.  He finally healed the fracture and the infection as well.  His leg was very short so he was a good candidate for a lengthening.  It is really gratifying to see the final resolution of some of these difficult earthquake cases, especially the ones who spent weeks and even months in the hospital and to whom we bonded.

Mar 15
Some amazing things happened today.  I’ll get to them a bit later.  Today the surgical load turned lighter since one of the big cases had to be canceled due to an upper respiratory infection.  Dr Paley did a case of congenital pseudarthrosis of the tibia.  He has a series of more than 90 cases.  This condition has historically been one of the most difficult to treat in the field of pediatric orthopedic surgery. Even some recent reports in the literature indicate that the failure rate is very high in this condition with the amputation rate approaching 50%.  Dr Paley has had no failures in his very large series.  I did a couple of small cases today in OR 2 which has no AC.  The best way to describe the experience is “unpleasant.”  I won’t use the words to describe the experience in the worst way.

Scott took one of our Severe Blounts cases back to the OR today.  He and Dr Paley did the case “blind” since our Carm is not working.  The postop xrays showed several of the pins needed repositioning.  That means that we will not do any more of those kinds of cases until the Carm is fixed.

I had arranged with Dr Hans Larson and Dr Paley to meet in Petionville with members of the Haitian Orthopedic Society.  Dr Paley was to give a talk to the society.  The whole team decided to go.  We finished with surgery a bit early and all climbed into the back of a tap-tap.  We stopped at a Haitian art gallery on the way and found some very nice paintings.  The rest of the trip turned into somewhat of a Haitian nightmare.  The traffic was awful and we got stuck behind a diesel truck for more than an hour.  The exhaust fumes where enough to nearly kill me.  Then our driver and translator both got lost and we wandered around Petionvile for nearly an hour looking for the restaurant.  What should have taken about 75 minutes even with traffic took more than twice as long.  The unpadded wooden boards we were sitting on were not something I would recommend even to my worst enemy.  Forget water boarding.  Need info from suspected terrorists?  Put em in the back of a tap-tap in Port au Prince traffic behind a big diesel truck.  We’d have Bin Laden in no time.  You would only have one opportunity at it though before the liberals would have you arrested and shot for using extreme torture.

The meeting with Dr Larsen and nearly 20 members of the society and several orthopedic residents turned out to be outstanding.  Dr Paley gave an excellent talk on the history and politics of limb lengthening.  The talk(in French) was very well received.  The question and answer period went on for nearly an hour.  Dr Paley wants to come back and put on workshops so they can learn the latest techniques in lengthening and straightening. I had a great time getting acquainted and talking to the Haitian orthopedists.  They all really appreciated the opportunity and want us to do it more often.  Dr Larsen told me he is working on an arrangement to have Haitian ortho residents rotate here at HAH!  That could be a great help for us with the tremendous volume of work we have here.  I offered to teach arthroscopy to any of the orthopedists with an interest.  They are all interested in the total joint program that we will have.  It was a really valuable evening.  A real “bridge builder.” 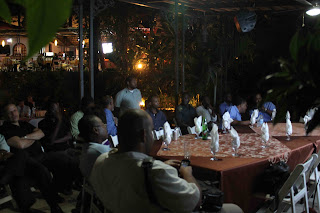 The whole team had a good dinner at the restaurant afterward.  We all expressed our appreciation to each other for the opportunity to work together at HAH.  All of the team members have a strong desire to return and do this again.  Dr Paley and team live in W Palm Beach and it is a short trip for them.  We made it back about midnight to find that Scott and Ben had worked on the C-arm after finishing the cases they took back.  They re-soldered the wires(correctly this time), re-calibrated the potentiometer with an ohmmeter and it now works perfectly again.  Praise God!  Now we can go full bore again with our cases(if the AC ever gets fixed in room 2.)

We tearfully said ‘goodbye’ to the Paley team.  They had an early morning departure.  Our lives continue to be incredibly enriched in so many ways.  The team members are very skilled and extremely hard working.  Of course, meeting, learning from, and working with Dr Paley is a priceless experience.
Posted by Karen at 5:05 PM