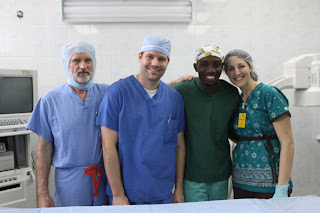 Wed clinic went until after 7 pm.  I saw 12 new peds patients with operative conditions and put them on Herzenberg's schedule.  I sent John 2 emails with pictures of patients and xrays.  His response to the first email was "yikes."  To the second email was "double yikes."  The attached hand xray is of a 12 y/o boy with an "earthquake" injury.  The most impressive cases were an entire family with severe genu valgum.  The mother has combined 75 degrees valgus.  The 14 y/o daughter has combined 115 Degrees and the 13y/o daughter has combined 125 degrees.  They walk with marked hip flexion presumably to take some of the stress off the ankles looking rather like crabs.  Pat did the patient with the tibial plateau malunion.  It wound up looking really good on the C-arm.  That will be a real win for the patient.  He is a mason and really wants to return to work.

We had twelve cases scheduled.  Several were smaller cases 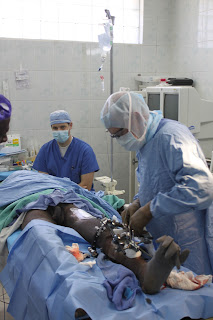 of post op cast changes and manipulations and debridements.   We started the first two at 7 am and finished the last one at 9 pm.   Pat did an arthrodesis of Subtalar and talonavicular joints and was very pleased how it went.   Together we did a case of chronic osteomyelitis in a femur fracture.  It is a case that the Yoon team had cared for when they were here in November last year.  We found at least two sequestrums and did an exchanged antibiotic SIGN nail rodding.  We have been able to get quite a few cases done that have been pending.  The Yoon team is really great to work with. 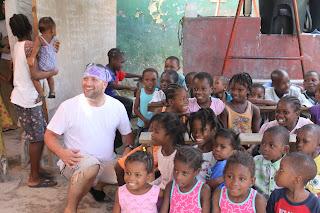 The Yoon team went to an orphanage today.  It is the same one they went to the last time they were here. Jeannie said they all had a great time interacting with the kids.

Today I did the clinic by myself and saw two more good patients for the JH team.  One is a 6 y/o with bilateral tibial hemimelia (the shin bone, or tibia, doesn't form properly and in some cases can be mostly missing).  She scoots around in the sitting position.  I offered her surgery to allow her to stand and walk and be as tall as her friends and she is eager.  Bilateral AKAs (above knee amputations) and prostheses will make her a happy girl.  A five y/o with untreated clubfoot also came in.  A displaced femoral neck fracture, nasty diabetic foot and 3 day old unstable pelvic fracture all came in within 2 hrs yesterday.  The coming week with no one to help me and only spotty local anesthesia help will present some challenges.

Maxi is a man who was transferred here from 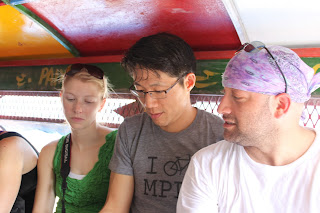 8 hours away with a fractured hip and femur on one side and an open fractured tibia on the other side.  The transfer occurred two months after his injury.  This fractured tibia was still exposed with open dead looking bone.  I stabilized everything and fixed his hip and femur shortly after he arrived a couple of weeks ago. The tibia has been the big challenge.  I had asked Pat specifically to help me with this patient.  Pat does soft tissue flaps to cover exposed bone.  We decided to shorten his tibia to eliminate the dead bone then Pat did a nice fascial-cutaneous flap from anterolateral.  We put STSG (split thickness skin graft) on the donor site.  I learned something good from Pat on that case that might be of help here in the future with these open fractures.  I certainly hope and pray that this will allow him to heal.  A nice bone transport could eventually restore his length.  I did the BK (below knee amputation) on the diabetic who came in yesterday and finished about 11 pm.  Two 12 hour days, two 14 hours days and one 16 hour day made for a tiring week.  I plan to put in a femoral traction pin to bring down the hemipelvis on the guy with the S-I (sacro-iliac-- where the spine meets the pelvis in the lower back) dislocation.  He also has a wide symphisis fracture- separation.  The superior ramus is quite comminuted so I won't be able to do an ORIF.  My game plan is to put perc cannulated scres across the S-I joint if I can reduce it closed supine then pelvic exfix for the symphysis.  If not, then open red and cannulated screws of S-I prone.  Then second stage exfix supine for the symphysis.  It will depend on the availability of blood too.  I sure wish I had some more help these next two weeks to help with the work load and especially the challenging cases. 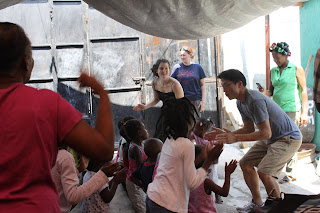 We have a big problem with our large cannulated screw set.  Our current set is a mixture of screws that require three different cannulated screwdrivers.  We are looking into the possibility of using screws and other orthopedic implants from a company in India. If the quality of the product from the company in India is good, we could get a full set with 20 or 30 backup replacement screws of every size.  That would give us inventory for a couple of years before needing to restock.  At ten cents on the dollar compared to Synthes, the price is certainly right if the quality is there.  They also have a proximal femoral nail system that bears looking into.  We could flesh out our implant options and at the same time solve our resupply issues for our entire implant inventory.  That would be an invaluable contribution to this program.

Now the energy saga!  Randy and Sammy changed out the radiator last Sunday and were unable to restart the generator.  That left us with one smaller unit with its own overheating problems. 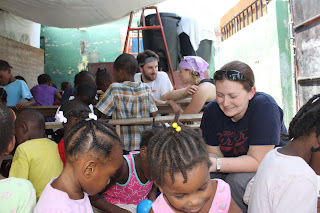 Haiti Power gave us more than usual during the week which helped, but the remaining unit pooped out on Thursday-THREE dead generators!  Randy found a small generator to continue charging the batteries for the invertor so we could continue to work.  I did several arthroscopies with no AC and a SIGN nail exchange with lead apron and no AC.  You should have seen the sweat I wrung out of my scrubs after the case.  My little pocket notebook is still drying out.  Administration quickly made arrangements for a rental deisel generator that came Thursday late afternoon.  It took Randy and Sammy all day yesterday to get it hooked up.  It runs 24/7 and purrs like a kitten.  It makes hardly any exhaust.  It is a Caterpillar.  Randy told me they can be bought brand new for 34k.  How I wish I had a couple of hundred k just sitting around looking for a good use.  The plan is to put a strong effort into getting our generators repaired and working.  The rental costs $200 daily.

The Yoon team left today.  It has been great to work with them. 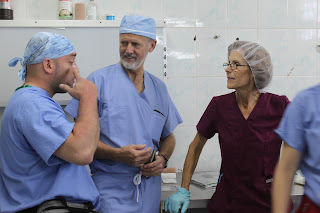 They are hardworking and very good at what they do.  I appreciate so much their dedication to this project and the people of Haiti.   Pat told me they are planning to come down again in September.  Tom Slater has a knee that bothers him a lot.  He has advanced medial compartment DJD.  He had an ACL reconstruction nearly 20 years ago.  I talked to him about my experience with Oxford unicompartmental replacements in patients without a normal ACL.  He is very interested.  I didn't give him encouragement, only told him of the options.  I think it is a reasonable procedure in a person his age with a normal lateral compartment.  I emphasized that there are no long term studies to give us statistics on the likelihood of long term good results ij knees like his.  I also encouraged him to make an appointment with Dr Keith Behrend in Ohio and discuss it with him.

I made rounds and everyone seems to be doing reasonably well.  I had hoped to put in the femoral traction pin on the patient with the pelvic fracture but there were no translators here today.  I'll do it tomorrow.  I got a lot of rest today and am thankful for that.  I am so thankful for the Sabbath.
Posted by Karen at 7:34 AM