Wilner gets his surgery!

This is Karen writing. Tim's Day 6 update will be posted later today, but I want to tell you a story about one of the patients Scott and Tim operated on on Wednesday, June 5th.  It is a story of how God works in all circumstances and weaves together lives to make a difference for others.

I'll start with a brief history.  In January 2009, in Santo Domingo, the Dominican Republic, I met Scott Nelson for the first time through Terry and Jeannie Dietrich.  I would do some volunteer work with him and the Dietrichs in the DR a few times that year.  January 12, 2010, and the massive earthquake hits near Port Au Prince, Haiti.  Scott, just a few hours away in the DR, responds with a team and begins to work, just two days after the quake.  Four days after the earthquake, Jeannie calls me to say that she and Terry will be going to Haiti at some point, and would I want to go. There was no other answer for me than, "Yes!"  In April of 2010, we join Scott at HAH for our first two week trip.  At the end of those two weeks, among other volunteers, I meet a nurse midwife volunteer named Rita. Our trips overlapped by just a couple of days.  Back in the US, we eventually connected again through Facebook.

Fast forward to March of 2012.  Rita returns to Haiti with a medical team, and goes to the region of Fond Parisien in Haiti to provide medical care to those in need through the ministry of Love A Child.  I closely watch for her updates and photos when she returns, eager to see what is going on in Haiti.  As I page through her photo albums on Facebook, I see a video she posted of a boy walking, a boy with a significant leg deformity, causing him much difficulty in ambulation. Her caption stated that she wanted to get this boy to the US for surgery. These were the screen shots I captured from her video: 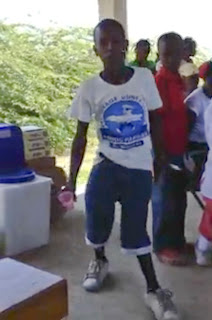 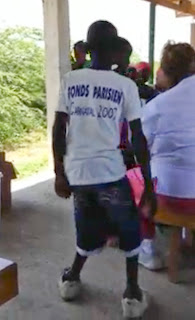 I messaged Rita through Facebook and told here that this boy could get surgery right in Haiti, at the Adventist hospital in Carrefour, for free.   I emailed these photos to Scott who agreed that he'd see him and operate on him the first week of June during his next trip.  All we had to do now was to find him and arrange for him to get there when Scott Nelson was there next in June.  Rita immediately got me his name and location, and we started the process of finding him.  Eventually, we got a hold of a man who served as a translator at the clinic Rita was a part of in Fond Parisien, who agreed to take him and his mother to HAH to meet Scott at the Orthopedic clinic.

Monday, June 4th, Scott and Tim met Wilner in the orthopedic clinic, and scheduled him for surgery on Tuesday. Due to a equipment issue, it was postponed till Wednesday, the 6th, but at 8am local time in Haiti, Wilner had surgery.  When he went to sleep, his left leg was bowed inward at a horrific angle, making walking difficult.  When he woke up, it was straight!  To see the photos, visit the album on Facebook. Click here: Wilner Gets Surgery

Praise God who used Terry & Jeannie moving to my small Midwest town so I could meet them; Scott Nelson being moved by Terry's work in the Caribbean to go there himself as a missionary surgeon instead of to Nepal, where he had planned to work; God moving in me to go with Terry and Jeannie on their trips to the DR where I would meet Scott; an earthquake moving Haiti to move us all to go there; God leading Rita to deliver babies for a career and then to care for women and children in Haiti so that our trips would over lap by a few days so that we could meet;  Mark Zuckerberg for inventing Facebook so that we would reconnect and keep in touch;  God taking Rita back to Haiti to Fond Parisien; of the hundreds of patients seen at the Love A Child Clinic, Wilner got matched with Rita for a clinician;  Rita posting her photos and video on Facebook, and me being on Facebook that day to see them. Praise God for all the ways he weaves our lives and circumstances together for His glory and to care for His Children.
Posted by Karen at 9:09 AM