Guest Blogger Amy Lindsey from Beauty in the Mess

Wednesday, December 8, 2010
Lock Down Again
Around the 28th of November we were on lock down in the hospital compound, now we are again due to the election results being announced last night. To say the least people are upset and there is potential for some major problems. There is no clear winner since nobody got over 50% of the votes so there will be another election in Jan for the 2 people with the most votes. People are unhappy with the announcement of the 2 leading candidates because it definitely looks like there is fraud. There are going to be problems as long as the current president's candidate gets through. It seems like people don't really care who goes on to win, as long as its not Preval's candidate. Read more... 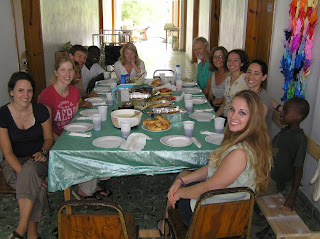 ﻿﻿In my last post on my rundown of what happened during November I forgot to mention some of the good things that have happened as well. Of course there was Thanksgiving and we actually took the afternoon off in order to celebrate. At that time we only had long term volunteers (about 11 of us) and so it was a little bit quieter and relaxing. I had the opportunity to try out my cooking skills by making pumpkin pancakes for all of us for breakfast and they seemd to be a hit. It gave us a little flavor of fall time in spite of it being 90 degrees. Read more...


Where did November go?

Wow, it is already December and I never even posted a single thing in November. Here is a quick rundown of November. In the beginning of the month we had Hurricane Thomas, then we started seeing cholera patients at the hospital, ending the month with the presidential elections. Throw in all the regular daily crisis and you get a pretty busy month...which is not too out of the ordinary for Haiti. We keep thinking that there couldn't possibly be more hardship, but then the next thing comes up. You never know what to expect and our hearts just cry out for relief for the people of Haiti. Through it all they are strong and resilient, but it makes me wonder how much more they can really take. Read more...
Posted by Karen at 7:26 AM