Terry does his first solo TSF and begins training a local Haitian man.

My first foray away from the security of our walled compound took Nathan and me to an isolated clinic just outside the small town of Croix des Bouquets to the north of Port au Prince. Tony Coletto is a general surgeon who works at that clinic periodically. He told me in April that there was an unused C-arm at their clinic that we could have. He reaffirmed that last week so we went there to check it out since our “good” C-arm continues to be nonfunctional. I felt totally safe with our driver, Richard. It was about 2 hours each way. We talked much of the time and it went by quickly. The town is on the main road leading to the Dominican Republic. There were lots of large trucks sharing the road with us. The C-arm looks like it will be a good backup for us. Tony says it was working perfectly when it was checked just before it was shipped here several months ago. They have a lot of other supplies that are occupying space in their storeroom and are going to donate them to us. Nathan sent a truck the next day to pick it up along with the supplies. I cranked it up when it got her and it worked nicely. I have some cases that we can use it on when Scott and Jim Matiko and team get here on Sunday. Friday afternoon I was asked by Dr. Spendey to go with her to translate and help transfer a patient to another hospital. The patient was having a difficult time breathing with a respiratory rate of 40. Richard drove the ambulance like a man possessed. With lights flashing and siren howling we careened down the left side of the divider into oncoming traffic as if it didn’t exist. There were several heart-stopping moments. Richard really is a great driver and the only significant damage happened to my nerves. I would love to watch Richard take that ambulance to Monte Carlo and go up against the Formula 1 cars. He would no doubt put them to shame. On our way back, we stopped at the airport and picked up Tim Downey. He is a nurse anesthetist who works with me in Appleton. It is great to have him here. I’ll finally be able to get things done in a normal time frame. Saturday I was able to get several cases done that couldn’t be delayed. That wouldn’t have been possible with only the local anesthesiologists.

Seven new volunteers arrived on Saturday including orthopedists Scott Nelson and Jim Matiko. An orthopedic resident, Ray Grijalva accompanied them from Loma Linda. Lucia, OR nurse, and Adriana, an anesthesiologist from Dominican Republic also came. We should be able to run 2 rooms regularly now. I scheduled several cases in anticipation of their arrival. Brent Scully came from Walla Walla. He is a builder and is going to help with a lot of projects. He might also come back to help with the completion of the new wing and the OR remodel. He thinks he might be able to get a group of builders to come with him from Walla Walla and help with the new wing/OR remodel project. Randy is an electrician from Washington State. He will be here for perhaps a year helping with all of the electrical needs. Scott Nelson needs no more introduction other than to say that he is an orthopedic hero. What he did here in Haiti during the chaotic months after January 12 is the stuff of great reading material. I would love to have the time to research accurately the details and put them in print for all to know and appreciate. If any one reading this journal would be so inclined, please do it. I am sure it would be a best seller. Jim Matiko is an orthopedic colleague and LLU graduate. He has had a very successful orthopedic upper extremity practice for many years in Southern California. He is also integrally involved in the orthopedic teaching program at LLU. He and Scott have been close friends ever since Jim mentored Scott during residency. Jim has had a strong interest in international orthopedics for many years. I am SO glad they are here to help with the volume of cases.

Sunday had some highs and some lows. We were able to run 2 rooms for surgery much of the day, but the c-arm was a disappointment. It worked great for Dr Matiko and the resident on their first case but Scott and I couldn’t make it work on our case. An illuminated flashing button warned us that the disk was ‘full’. We tried every trick we could think of to empty the disk to no avail. The case went well even without the c-arm but only because of Scott’s expertise. I did my first arthroscopy here and it went very well. Jean Joel assisted me and he is great.. The Linvatec equipment is working beautifully. The company and their representative, Ed Mueller, are to be congratulated for their generosity. Their willingness to help the Haitians is emblematic of a big-hearted unselfish spirit. We spent a lot of time today organizing the orthopedic trays and equipment. It is a big job. Many of the trays and sets hadn’t been properly restocked after being used. I assisted Scott today on a complex tibial nonunion that required two Taylor Spatial Frames. Tomorrow we have a simple one scheduled that I will be able to do myself.

The last two days have been a somewhat of a blur with nearly nonstop surgery and clinics. I also spent what seemed like hours trying to email and then talk with the biomedical technology people in California who were supposedly familiar with the C-arm that we just got from the little clinic in Croix des Bouquets. Even though I gave them all of the model numbers from the machine, they can’t seem to find any correct information to give me to get workable again. The unit was made in 1988 and I imagine there is no one alive from that ancient period of technological history who would have an idea of how a machine of that vintage would be able to be repaired. Another negative issue that presented itself yesterday was regarding my orthopedic physicians assistant trainee, Jean Joel. The OR director, Madame Jordan, let it be known that she was totally upset at discovering that we were allowing a “translator” with no training to scrub in “her” ORs and that was why there were so many complications and that she was going to quit if it continued. I wish she had come directly to me with her concerns. I certainly do not want to have an adversarial relationship with anyone here in the hospital let alone the director of the OR.

The Taylor Frame went nicely. Of course, Scott was in the room quite a bit of the time so I certainly can’t take credit for the work. He wasn’t scrubbed in though so I can say that I put the entire frame on by myself. Scott is really great to work with. He is a very patient teacher. The patients and staff here at the hospital all love him. I am fortunate to have him for a friend and teacher. The TSF wasn’t a very difficult case since there was not a large deformity. The ring/pin/wire construct in the OR is only the first step. The second step is to immediately restock the dizzying array of rings , bolts, nuts, wires, bone pins and adjustable bars in three different large instrument trays. All of the used instruments that are case specific also need to need cleaned and placed in the proper trays. Then everything will be ready for the next TSF. The third step is taking an xray immediately after surgery. The TSF program then calls for entering a set of numbers that define the deformity and the mounting parameters. Those numbers are obtained by measuring specific points and distances and angles on that AP and Lat xray. The fourth step is to go online and actually enter those parameters as well as the “structure at risk” and the rate at which you want the deformity corrected. The program then immediately gives me a program which tells us and the patient exactly how to adjust the bars every day to reach the desired correction. The fifth step is teaching the patient or a family member or friend how to make those adjustments. It is challenging to get it all done especially when trying to work through a big clinic, get the rest of the surgical cases done for the day, make rounds on 20 or more inpatients, some of whom are complex cases, have meetings with administration, learn more Creole, try to maintain some level of personal fitness, train Jean Joel, teach the CBM physical therapists who are so anxious to learn, email and call biomed specialists with the hope that someone might be able to get our c-arms working again, answer emails from orthopedists who would like to participate or who are already on the schedule to come, recruit anesthesiologists, raise funds for the necessary equipment and implants and the indigent patient fund and now try to restore a relationship with the director of the OR. Needless to say, this entry in my journal is taking place at 4:30 am. A couple of things give me a great deal of comfort. First is that I have Jeannie with me. She is wonderful to work with. She is an unbelievably hard worker and has such a desire to learn everything as quickly as possible. I am unbelievably fortunate and blessed to have such a terrific person in my life. Secondly, I have the Sabbath to look forward to every week. Even though I have to make rounds and if necessary do an urgent surgical case, I am sure that I will be able to get at least some of the rest that God knows I will need for the upcoming six days. Having that one day out of every seven to let the multitude of daily challenges lie dormant and allow God’s Spirit to refresh my body and soul is a great delight. 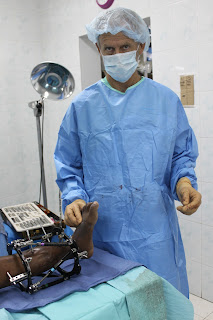 Jim working with Jean Joel who is studying to become an Orthopedic assistant. 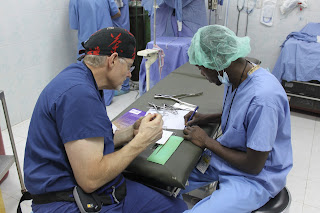